The vibration data on a turbine-driven feed water pump and turbine (figure below) at a nuclear power plant showed a step increase at running speed on the inboard turbine points. Additional data showed the levels were increasing and failure of this component would result in a forced derate of 35%. 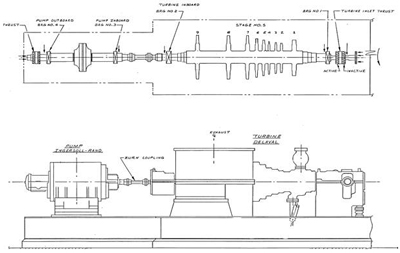 During the troubleshooting process, VAI collected and analyzed cross-channel phase data and confirmed the increase was due to an issue that was affecting the alignment. We also provided informal ODS training to the plant’s vibration engineer and installed a multi-channel vibration monitoring system so the plant could monitor and trend levels.

Our accurate data analysis services and recommendations allowed the plant to continue operating until the next scheduled derate. At that time, they confirmed the problem was due to the loss of coupling lubricant, which resulted in a bound coupling that subsequently affected the alignment.

Another nuclear power plant experienced a sudden increase in gearbox vibration levels when pump flow was increased to meet new test requirements. The vibration levels increased primarily in the horizontal direction on the gearbox and at 4x diesel running speed. This increase occurred on their number one safety-related component and required the plant to correct the problem within 36 hours or shut down until it was fixed.

As a result of the increased flow rate, gearbox vibration levels increased from 0.15 to 0.90 IPS at the highest point. Plant Engineering personnel subsequently determined the maximum allowable levels on the gearbox could only be 0.56 IPS-Pk (25% higher than that allowed for the pump).

A review of work history revealed that the as-left alignment was out-of-spec by 30 mils, but due to the short time frame there was not enough time to move the diesel (or pump) due to all the associated connections. Furthermore, if the gearbox was moved to correct the alignment on one side, the alignment on the other side of the gearbox would get worse. And to further complicate the problem, the gearbox had a newly found resonance at 4x diesel speed.

VAI also recommended detuning the resonance by adding mass to the top of the gearbox. A stiffener was quickly ruled out because of the time required to engineer and approve a new stiffener and because of the possibility the new resonant frequency might be close to one of the diesel forcing frequencies.

By optimizing the alignment and detuning the resonance, vibration levels dropped from 0.90 to 0.44 IPS which was well below the required 0.56 IPS limit.

The photo below shows the steel plates (370 lbs.) that were added to the gearbox. 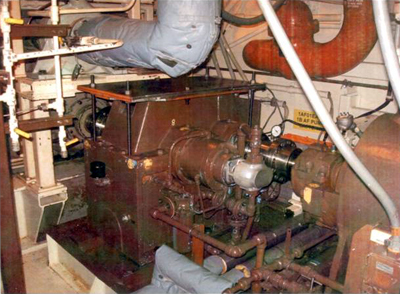 One of the chemical plants VAI provides monthly services to operates six chemical reactors to produce their product. Each reactor has a vertical shaft that rotates about once per second (60 RPM), making spectral analysis useless for monitoring bearing health.

In the past, when a shaft bearing failed unexpectedly, the customer lost their product, which would also harden within the reactor, requiring expensive down time and water-blasting to remove the product. According to the plant, the estimated down time, lost production and repair costs approached $1,000,000 for each occurrence.

As a result, VAI implemented waveform analysis on each shaft casing to look for bearing impacts. This analysis was performed each month and VAI determined the normal vibration level was approximately +/- 0.05 IPS-Pk.  Subsequently, during one of our walk downs, the level on one shaft were found to be ~6x higher (as shown below).  The data showed impacting and our analysis of the data correctly identified a degraded rolling element bearing. 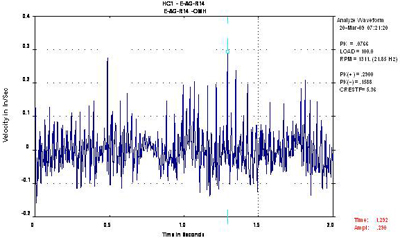 Based on this data, the plant replaced the degraded bearing at first availability and, by providing a timely reporting of this issue, the customer was able to continue operation and avoid the consequences of an untimely bearing failure.

Collecting and analyzing data for new customers is always interesting because we never know what we’ll find, and invariably we find a component on the verge of failure, which could affect plant operations.  One example occurred at a Utah mining facility. After collecting and analyzing the initial data for this mine, we observed a higher amplitude bearing defect frequency (~0.4 IPS) on the outboard motor of the plant’s centrifugal air compressor (figure below).

The plant immediately performed corrective maintenance and discovered the bearing was spinning inside the bearing housing. Had this bearing issue not been accurately identified in a timely manner, the plant’s air compressor would have failed, affecting plant operations.

Does YOUR plant have a reliable vibration program?

Have a project for us?

Connect with us today to get your project underway. We’d love to discuss your particular challenge and begin the process of designing a solution today!
Contact Us Today!
Go to Top